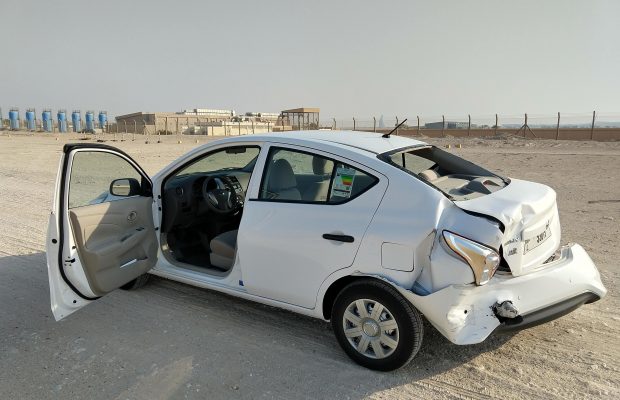 I use the skills CIA taught me everyday; to win business, to win influence, to stay safe…

Every spy skill is useful, even though you use some more than others.

But sometimes it’s the skills you use the least that have the greatest impact.

That was the case for me last week when CIA offensive driving saved my life after a high-speed collision on the outskirts of Abu Dhabi.

I was headed home for the weekend and excited to see my wife and kids. The last leg of my commute was on a well-traveled corridor where the legal speed limit was 120kmh (75mph).

A small section of the road was prone to sand-drifts that covered the right lane the afternoon. As I approached the sandy section, I checked my mirrors and moved to the left lane. The sun was out, the roads were clear, the day was hot – a normal Abu Dhabi day.

A brown US-model truck appeared in the distance in my rear-view mirror.

The sight of an American made car overseas always brings a smile to my face.

A few seconds later I checked the rear-view again and saw the truck much closer than it should have been – especially considering I was already cruising along at 75mph. I checked the right lane to see if I was past the last bit of sand-drift and able to change lanes…

Then came the sounds we all hate to hear: screeching tires, crunching metal, shattering glass.

My speed was boosted and my car pushed forward and sideways on the two lane highway.

When my back-end broke free of the truck behind me, I was traveling FASTER than 120kmh and nearly sideways. My front wheels had traction but my back-end was swimming back and forth.

I started to regain control of my vehicle just before running off the shoulder into the desert.

I hit the sand moving upward of 100kmh (62mph). Everything changes when you drive on sand; you lose steerage, lose momentum, and lose visibility as sand kicks up around you,.

I was fortunate to be close to home, in a stretch of desert I knew well. When I left blacktop for desert, I lost visibility and felt steerage go soft. I knew I had about 200 yards before I risked running into buildings, fence-line, or roadside construction. I kept my wheel straight, kept my foot off the brake, and let the sand slow me down.

After I came to a stop and the dust settled around me, I was about 75 yards off the road and roughly parallel to the highway.

I looked up and caught a glimpse of the truck that hit me before a turn in the road took it out of sight; extended cab pickup, Ford or Chevy, dark tinted windows, licence plate with five digits. That was all I saw before the driver was gone.

The truck may have gone off into the horizon, but I knew my hit-and-run had one step left…

I still had to deal with the adrenaline crash that was about to set in.

I checked to make sure nothing was on fire, made a few mental notes about the time, and pinned the accident site in my phone.

Then came the shakes.

My hands started to rattle as my body processed the adrenaline dump. I was able to call my wife on speakerphone to update her. She asked about my safety, confirmed my location, and said she was on her way to meet me with water. (There are some major benefits to being married to a fellow CIA field officer – she is a mind reader!)

When my hands stopped shaking, my heart rate normalized, and my full field of vision returned, I notified the police, tow truck, and made other typical car accident calls.

Over the next few days I was vigilant to observe any pain or tightness in my body. Whiplash and other back/neck injuries can take time to manifest. The same is true for emotional trauma – it can take days before symptoms start to show.

I wanted to make sure I actively assessed myself for any physical or emotional after effects. Today, a full week later with no symptoms at all, I am confident saying I am safe…

I walked away with no injuries  from a high-speed collision.

Here is how my CIA offensive driver training kept me safe:

Nothing substitutes for situational awareness.

It is the easiest and most overlooked tool to avoid, anticipate, or overcome a dangerous scenario. Intelligence operators, police, military, and first responders are trained in situational awareness. It is the hallmark of a field professional.

Elite operators live in the third level, known as code ‘yellow.’ It was my ‘yellow’ zone that allowed me to observe the truck in the distance and recognize its unusual speed.

Situational awareness is more than just observation. It is the tool that allows your mind to transition from passive observation to active anticipation. By being aware of what is around you, you give your brain the information it needs to think a few seconds ahead of real-time.

And those few seconds can save your life.

In a covert CIA training facility in 2008, I was really glad I passed high-school physics.

After I recognizing that the truck behind me was coming at an unsafe speed, I was able to start planning for a possible collision. In a typical vehicle, the center of mass is in the front end because of the engine block. The rear end is the lightest part of the vehicle. This weight distribution is important.

The good news is that every vehicle except Monster Trucks use front wheel steering.

So a car’s center of mass is above the center of steering. That means maximum traction at the point of steerage. But the bad news is that the rear of the car – often the center of drive power/torque – has little weight to support traction.

When hit from behind, the rear end is going to get crushed – it has no mass to protect it.

Regain control of the fishtail by taking your foot off the accelerator – do not apply brakes.

This immediately decreases your speed and shift weight to the front of the vehicle, the center of steerage. Gently countersteer to keep your front end under control and your rear wheels will regain traction.

After you have 4 wheels with good traction, then you can safely apply brakes.

The most dangerous part of a collision is not the moment of impact; it is the seconds immediately following.

The decisions you make in the seconds following a high-speed collision determine your fate.

The actions you take after being hit decide what type of statistic you become.

And your level of knowledge is the number one factor that determines the actions you will choose.

Situational awareness will give you real-time knowledge of your surroundings and the opportunity to anticipate other drivers. Vehicular physics helps you predict how your car will physically respond to a collision. Now you need to know what will happen with your body.

At the moment of impact, your adrenaline will spike.

This release is designed to give your muscles and mind immediate energy/focus to ensure survival. At the same time, a second hormone (cortisol) will be released to give you long-term energy for fight/flight.

These hormones are so powerful that they make you feel like time slows down.

Moments will feel like seconds and seconds like minutes. Your body is not used to operating at such acute cognitive conditions, so you will feel ‘outside’ yourself. Expect that feeling and ignore it – take the actions you need to gain control of the vehicle and come to a controlled stop.

After you come to stop, your body still has to process the hormones it just released.

Once you are back to safety, your survival instinct will shut down. That means no new hormones… and a terrible energy crash. Your hands will shake, your eyelids will get heavy, your body will feel immediately fatigued. Resist the urge to pass-out/sleep – it will pass quickly.

You will not think clearly until 2-3 minutes after you are physically safe. Use those 2-3 minutes to breathe deeply and regain situational awareness. Look around and confirm you are safe from a second impact, fire, or other danger. Then you can start making phone calls and checking yourself for injury.

Your survival is not a matter of luck.

It is a matter of training, preparation, and action.

I am here today as a testament to CIA’s offensive driving program.

And I am more dedicated than ever before to bring this program to you. Stay tuned.