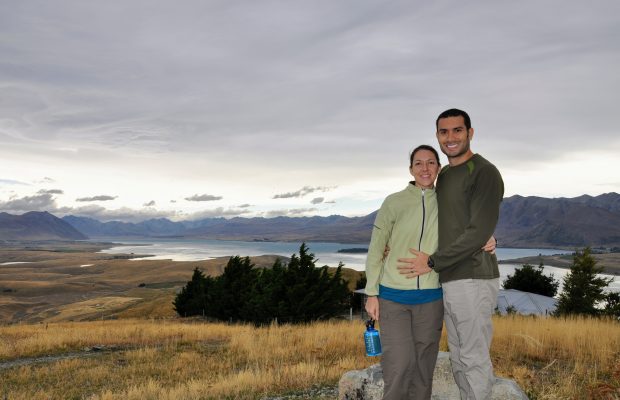 Welcome to your newest #SpyHACK!

In 2012, my wife Jihi and I went on a 3 week trek around New Zealand’s South Island.

We were escaping the rainy season in Bangkok to take a few weeks of much needed R&R (rest & relaxation). The South Island scenery was incredible and the weather was perfect. It was an amazing adventure.

In our newlywed, pre-children days, my wife and I liked to escape as far away from civilization as possible.

Our main goal was to see things and build memories that were truly ours. It’s one thing to stand in line and snap the same Great Wall selfie as 1,000 other tourists. But it’s something totally different to summit a 14,000 ft Colorado peak and spend an afternoon without another human being in sight.

That kind of aloneness builds incredible trust, teamwork, and confidence between partners. It also makes for some memorable romantic moments (G-rated and otherwise).

We had just left the South Island town of Te Anau and Fiordland National Park to head north to Milford Sound.

We had rented a campervan (a small RV) to save time getting around. In New Zealand, travelers are welcome to camp on any public land in the country – and there is a lot! Its called ‘Freedom Camping.’

Jihi and I were taking full advantage of freedom camping in our little 19ft home. We drove an hour out of Te Anau and found an great freedom camping spot that looked west toward Mount Christina. We pulled onto an unmarked dirt road, put on the parking brake, and broke out the grill. Heaven…

Our time with CIA had made us both comfortable with small spaces and remote places.

In many ways, small spaces and minimalist life brought us comfort. Days are simple, waste is low, and mobility is high.

But when injuries happen, being far from professional medical care can escalate quickly toward disaster.

Early the next morning, I got up to use the bathroom (thank you RV camping!!) and went to the kitchen area to wash my hands. It was dark and I was foggy with sleep when I accidentally knocked over the carving knife that was drying from the night before.

Even in my sleepy state I realized that the knife was falling toward my more precious parts and I didn’t have room to dodge it in our cozy little space. So I reached out and grabbed the knife as it fell. I caught it by the blade and felt the metal press into my middle finger in the process. Press, but no pain…

I barely felt the cut (…that’s a good knife), but I felt the blood start to run off my fingertips.

I immediately woke Jihi and told her I had cut myself. She could see I was still holding the knife… over the sink, of course. Let’s be civilized, here.

I felt my adrenaline climbing, she knew to expect the same, so she took over with total calm-headedness.

We were far from any kind of professional medical care. We had minimized our first-aid kit to treat small scrapes/cuts. But this was way too big for a first-aid kit.

We had to lean on our training for treating field wounds.

There are 5 types of open wounds you can get in the field:

When I opened my hand, it was clear that I had a deep laceration.

The tissue toward the tip my finger was fully separated from the tissue in the middle part of my digit. The off-white facia that connects muscle to bone was visible in the cut but still in-tact. The bleeding was continuous but free of the spurting/pulsing that comes with life-threatening bleeding.

There are 5 steps to treating an open wound you get in the field:

The most common mistake people make treating wounds is that they FIGHT the body’s natural healing process.

Many common first-aid treatments actually do more harm than good…

Contrary to Hollywood’s opinion, professional field officers do not think scarring is ‘cool’.

Scarring is a sign that the officer did not take proper care of their wound. They either failed to apply their training correctly or they were incapacitated by the wound and fell into the care of someone less qualified then they are to treat their needs.

A well-treated wound not only allows a war fighter to continue the fight, it also heals quickly and leaves almost no trace behind.

Here is how we treated my laceration according to our training and kept our adventure going strong:

The most effective way to treat a field wound is to encourage and assist the body’s natural healing process.

Our adventure to Milford Sound went uninterrupted, and by the time we crossed back through Te Anau I was rocking a standard sized band-aid that I changed one time a day.

It can get you and me through almost anything if we give it the tools it needs to do what it does best.