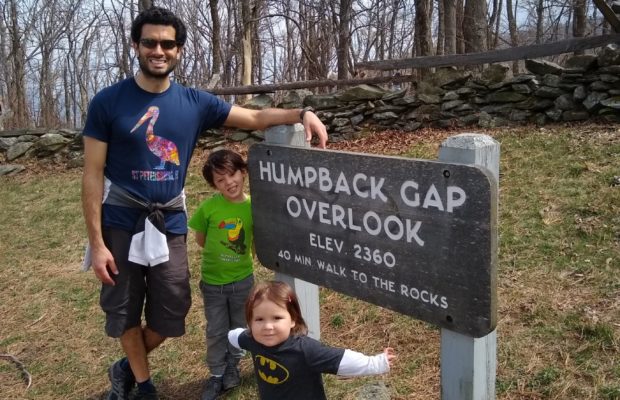 My son, Sina, is a 6-year-old gun enthusiast.

We were recently traveling the eastern US heading to PA to visit family. We decided to spend a week camping in the Shenandoah Valley, one of the most beautiful places in Virginia. My son made fast friends with a little girl named Jane who was camping near us.

While I sat outside with Jane’s parents, Jane invited Sina to take a tour of her camper. A few minutes later, Sina came out the front door of the camper and asked me to take him back to our own RV.

He was acting cool and calm, but his eyes told me something had happened inside the camper.

When we got back to our motor-home, Sina told me what had happened.

While Jane was showing Sina her camper, she opened a drawer and showed Sina the handgun her Dad keeps to protect them.

After praising Sina for following his training, we both went back over to Jane’s family and continued playing… outside the camper, of course.

Using my EverydaySpy.com ‘Social Mastery’ skills, I gently steered the adults into a conversation about guns. It didn’t take long before I learned why Jane’s Dad keeps a loaded, unsecured gun inside his travel trailer.

Jane’s Dad – like many Americans – was nervous about the rising rate of fatal mass shootings.

Recent shootings in Ohio, Texas, Nevada, and California made Jane’s Dad worry for his family’s safety.

He didn’t trust ‘Run, Hide, Fight’ because the people running, hiding, and fighting were getting killed and injured!

Unsure how to keep himself and his family safe, he decided to buy a gun.

He admitted he didn’t really like guns. He wasn’t comfortable on the firing range and rarely took the weapon out of the camper.

With each coming month, the numbers will grow.

And while politicians and pundits point fingers and debate legal rights…

There is a lack of useful information on what to do if you find yourself in a mass shooting.

With no end in sight for an effective government program to stop mass shooting violence, the public is left guessing how they can protect against an active shooter.

CIA officers are trained how to react during a mass casualty event.

We don’t have to guess how to react. We know.

Spies have to operate independently in the field; under cover, outside of contact, totally alone. We are prepared to keep ourselves and our families safe in any situation.

This is how we train to survive a mass shooting.

Never turn your back to a shooter.

Instead, move at right angles to the threat and seek cover.

Head and chest wounds cause 77% of fatalities during mass shooting events. These wounds are due to a single predictable behavior – victims turn around and run away when they get scared.

Whether you are the primary target or a target-of-opportunity during a mass shooting event, the most important thing to do is physically minimize your body’s target area.

Field operators are not trained to ‘Run, Hide, Fight.’

There are major flaws in the ‘Run, Hide, Fight’ model that have been openly discredited by first responders, emergency personnel, and law enforcement professionals.

When you run away from a shooter you GIVE them three dangerous advantages:

Despite these facts, ‘Run, Hide, Fight’ remains the go-to training message across America simply because we’ve been saying it since the early 2000’s.

‘Run, Hide, Fight’ has become so commonly advertised that predators use it to predict the behavior of their prey.

The most dangerous reactive behavior in a mass shooting is to turn and run away.

Rather than present your back and spine to the threat, move at right-angles to the shooter to minimize your target area.

When you move perpendicular to your target, you GAIN three important advantages:

Spies, soldiers, police officers and medics are trained to move at right-angles to a threat. Unless we are wearing body armor, field officers never present the front or rear of our body to a threat.

Cover is the safest and fastest way to protect yourself
during a mass shooting event.

Now that you are moving at a 90 degree angle, you can observe the shooter and see where they are directing their attack.

The next step is to take cover.

Even the act of lying flat on the floor or against a wall can be considered cover. Tunnel vision caused by an adrenaline rush in the shooter blinds their peripheral vision. A still target pressed against a wall or the floor can go totally unnoticed to an active shooter.

Cover options are limitless and can include:

A shooter will continue targeting a fleeing crowd as their center of focus. They will not waste time looking for individuals who have taken cover.

By minimizing your target area and taking cover you have given yourself
the most important tool for survival: Time!

The most powerful weapon you have at your disposal in the event of a mass shooting is your brain.

Choosing which exit to use during a mass shooting is the most important decision you will make in your life.

Your brain needs between .15 and 1.75 seconds to complete a thought.

Complex thoughts have to travel through multiple synapses in your brain, adding .05 seconds per synapse. While a routine decision can be made in fractions of a second, a complex decision – like how and when to exit a mass shooting – requires more time.

If you move at right angles and take cover, you will have time to choose the best exit.

From 1994-2013, the average rate of fire during a mass shooting was 4 rounds per minute. That gives you 15 seconds between shots fired.

If the first shot triggered your response, you will have broken away from the crowd, taken cover, and observed the shooter’s direction of attack before the second shot is fired.

Now you have time to plan a safe exit.

Shooters expect people to rush for primary exits during an attack.

In US shootings with more than one gunman, exits were used as a staging point for the second shooter to launch their attack. Between panicked peers and additional shooters, exits become immensely dangerous during a mass shooting.

Look for non-traditional exits like windows, stairwells, and separated offices. All of these offer effective exit options that are difficult for a shooter to predict or control. And remember that if your cover is strong enough, the safest option may be to stay put.

More than half of mass shooting events end before first responders arrive.

Your survival hinges on your own individual decisions.

I know that feeling. And I know I will survive.

Now I know you will, too.

Survival is a matter of knowledge, not luck.

Police may find a way to respond faster to an active shooter situation. Or they may not.

There are many factors that we cannot control.

But if you can minimize your target area, seek cover and exit, you will find yourself taking control rather than running in fear when you hear the first shot.