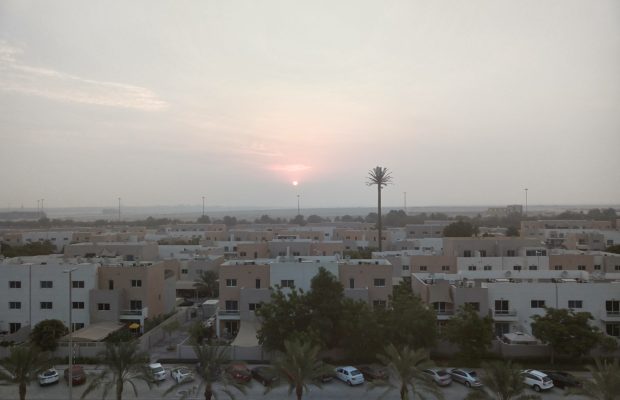 In the Middle East, the desert sand blows all day long.

There are different types of sand. Some sand is heavy and course. Other sand is as fine as powder.

It takes a big wind-storm (aka: Sand Storm) to pick up the course sand. Sand storms are rare but can cause significant damage to buildings, vehicles, and people. Its the equivalent of heavy-duty sandpaper being rubbed against paint, glass, and skin for hours.

Much less scary, the powdered sand is always being carried in the wind. At dusk and dawn, it casts a haunting filter over the sun.

The sand is both a constant companion and a continuous nuisance.

It is humbling to drive long distances with nothing but rolling sand dunes to keep you company. At home, the sand covers all of civilization in a layer of yellow dust.

And the combination of heat and sand is incredibly destructive.

We bought my son, Sina, his first kids scooter recently.

Scooters are the ideal kid-vehicle around here because they can be folded and taken indoors, safe from the heat and sand.

As the sun goes down, the streets come alive with kids riding every type of scooter you can imagine. We’ve seen standard scooters, three-wheeled scooters, scooters with electric motors and passenger seats, trick scooters, toy scooters, luxury scooters, and scooters that transform into motorbikes.

My son was excited to ride his new scooter outside with the other kids.

So as dusk set in and the temperature fell to a (relatively) comfortable 97℉, we went with him out to the courtyard to break in his new wheels.

After a few fits, bursts, and busts, his frustration became clear. A few minutes later, he abandoned his new scooter by a palm tree and opted to run around on foot instead.

The next few days were the same; initial excitement for his scooter, gradual frustration, and eventual abandonment by the same palm tree.

By the fourth day, his discouragement made him stop wanting to take his scooter outside at all.

When I asked him why he wanted to leave his scooter behind, he said:

“I’m not good at riding it. I can’t go fast, I lose my balance, and I get embarrassed in front of the other kids.”

All you super-parents out there are going to judge me for what I did next.

My time at CIA taught me the destructive power of negative thoughts.

Every action we take, every decision we make, starts as a thought first. And there is a proven correlation between our thoughts and our performance.

The average person has about 60,000 thoughts each day.

I recognized that my son was being attacked by negative thoughts.

He thought he was bad at riding a scooter.

He thought he was physically unable to go fast or keep his balance.

He thought he was less capable than the other kids scooting around.

You know how that feels. So do I.

Because negative thoughts attack us at all ages.

They are like sand in the desert – a constant companion and continuous nuisance.

But where most parents would comfort and encourage their child, I did not.

Negative thoughts are born in a region of the brain called the vmPFC (ventromedial prefrontal cortex).

This region in the brain is responsible for personality, judgement, and learning from mistakes. But it is also the place where emotions are combined with decision making.

Negative thoughts are based on emotion, not logic. On his scooter that day, my son felt less capable than he actually was. He was not physically limited in any way, but he felt like he was.

Because the vmPFC is the link between emotions and decisions, it is both the place where negative thoughts begin and the reason we decide to act on them.

But the decisions we are making are not logical.

The feelings we are feeling are not based in objective reality.

The mental process is flawed, and the results make us hold ourselves back even when no external obstacle actually exists.

Our vmPFC was vital when we were focused on prehistoric survival.

It was the tool that kept us from eating berries that made us sick, helped us hunt in packs, and gave us the ability to choose between fight or flight.

As an uncivilized species, we needed negative thoughts to keep us alive. Overconfidence could lead us to pick a fight with a lion when the smarter idea was to hunt an injured gazelle.

But now we live in different times, and our vmPFC has not evolved at the rate that civilization has evolved.

So we have to train our brain.

Train it to recognize negative thoughts and to defeat them.

This is how I trained my son to combat his own negative thoughts.

And if you can catch him as he whizzes by on his scooter, he’ll tell you all about it:

You can’t do a Google search these days without crossing paths with someone talking about visualization. Certified psychologists and certifiable nut-jobs alike will promise you the moon and stars if you just ‘visualize’ yourself plucking them from the sky. That’s great for selling books and boosting page-views, but its useless for combating negative thoughts.

Because negative thoughts are based on emotions, we have to combat them with logic.

And the fastest way to bring logic into the equation is to use a technique called ‘negative visualization.’

Unlike its hippie cousin, negative visualization is an exercise where you visualize all the bad things that could happen.

And as you run through the list in your mind, you visualize how you would solve the problems as they occur.

The RAS is a part of the brain that builds experience and mastery. Because the brain struggles to differentiate between real images and imagined images, the RAS makes it possible for you to gain real-world experience by visualizing imagined scenarios. It’s the tool pro-sports players use to shoot clutch shots and method actors use to ‘become’ their character.

When you visualize your logical reaction to negative scenarios, your negative thoughts lose power.

Because your vmPFC is rooted in emotion, the thoughts it produces are largely automatic.

These automatic thoughts are the reason we have 54,000 repeat, habitual thoughts each day. Your thoughts about how to crack an egg, how much toothpaste to use, and which side of the bed to enter/exit are all automatic.

While negative visualization builds experience and logical reasoning, it does not combat automatic thinking.

Automatic are built over time… and that means they can also be broken.

To break automatic thinking, all you have to do is pick any routine task and choose to do it differently that day.

You can crack eggs with your non-dominant hand.

You can change the order that you get dressed for work.

You can make dinner into a picnic and eat on the living room floor instead of at the dinner table.

Changing even one small routine causes the vmPFC to redirect resources and make non-routine decisions.

Your brain must reduce the number of negative thoughts in order to make the new decisions. Some people incorrectly call this redirect of resources a ‘distraction.’ They are wrong. Distractions and redirects are two different things.

A ‘distraction’ is a brief event (2-5 seconds) that triggers an automatic positive response from within the vmPWC (like happy music, a nice picture, a bowl of ice cream, etc.). In comparison, a ‘redirect’ consumes resources from the vmPWC for several minutes by forcing it to process new information.

A distraction does not change anything; a redirect creates new neural pathways to accomplish a task.

Choose one task or one hour or one day – anything you want. The goal is to take something routine and make it challenging.

You’ll notice the discomfort right away. It will be awkward; it will be slow; it will be frustrating. At CIA we call these redirects ‘wrinkle makers’ because they can be so frustrating you can almost feel the new brain wrinkles being made.

When you feel that way, you know your doing something right.

You’ve used logic to counter emotions with negative visualization. You’ve redirected mental resources to build new neural pathways and break automatic thinking. Now is the time you ask yourself, ‘what negative thoughts am I having right now?’

When you challenge your mind to grow, you’ll find that the negative thoughts stop.

Just like you can’t talk and listen at the same time, your brain can’t think and learn at the same time. Even more important, you brain is wired to learn first and think later – MUCH later – after you index the new information and reflect on it.

That means as long as you are learning, you can combat any negative thoughts that come your way!

It boils down to resources, cognitive processing, and brain biology.

Expanding your experience through knowledge, action, or even imagination can stop negative thoughts in their tracks.

Have you ever wondered why CIA has a massive Library at Langley?

Why they have a sprawling art gallery spread throughout the first floor at Headquarters?

Why they have dozens of indoor and outdoor nooks where people can sit alone or in small groups?

Because negative thoughts have no place in elite circles.