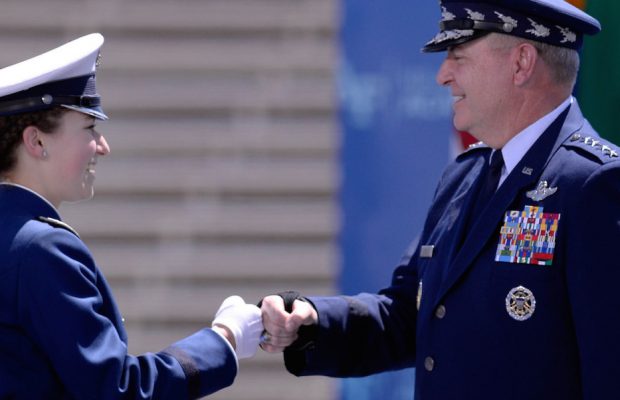 If you’ve listened to my Everyday Espionage Podcast or seen me speak live, then you that I use questions as a tool.

Questions put you one-step ahead of everyone else, give you control right now, and allow you to predict the future.

But you have to know the right questions to ask.

It was not lost on me that I was a C-average cadet stepping into an unpowered Air Force Academy TG-10 model glider with the senior ranking officer at the Academy.

Luckily, that fact was totally lost on General Welsh!

We were towed up to just over 2,000 ft by a super-charged Cessna tow-plane. The tow up was loud and awkward – the soaring plane was cramped, I sat in an unnatural reclined position, and the view was straight up the ass of the Cessna. We bobbed on a tow line 200 ft long, like a giant fish on a hook in the sky.

The General had the helm the whole way up. This was my first ever training flight, and the most complicated part of gliding (we call it ‘soaring’) is the take-off sequence. But once we hit our soaring altitude, he gave me my first task… release the tow cable.

When I popped the tow cable release, the whole world shifted uncomfortably.

First, the glider slowed quickly… in a stomach-dropping kind of way. I know now that the loss of speed was because the tow-plane was overpowered to account for its own weight plus the weight of the glider. Once we released the cable, the glider depowered and started to ‘soar’ instead of being ‘dragged.’

…But I didn’t have that knowledge then.

The second awkward feeling was that after spending so much time pitched upward (enjoying the tail of the tow plane), the General quickly pitched the sailplane nose down. Again, it makes total sense that a glider would need a down-angle in order to gain the airspeed needed to create lift over the wings.

….But I didn’t know that then.

The third awkward feeling was the sudden onset of quiet. After the long tow behind a noisy tow plane, the booming voice of the general hollering into a hand-held radio in the small cockpit, and the screaming sound of the air passing all around us during the ascent, everything went strangely silent after we popped the cable.

The tow plane broke away and returned to the airfield for the next glider. We broke in the opposite direction.

Our airspeed normalized, our glide-path leveled, and the whole world opened up beneath us.

I still felt shrink-wrapped in a flying syringe, but I also felt awestruck.

The air flowing over the cabin was calm and steady. The entire sailplane was quiet except for the light metallic clicks of the yoke as the General kept the glider steady.

And then he started to talk to me… not in a loud, booming radio-voice – but a helpful, normal person voice.

I’d love to say the rest of the flight was a joyful, happy memory; that I was a natural talent in the cockpit and that the General and I became fast-friends after that. But it didn’t happen that way.

I nearly pitched the plane into a stall twice, cross-wind gusts over the mountains kicked up beyond safe levels, and the General had to force the plane into an aggressive slip to land us safely between gusts.

While the flight-time was cut short, the lesson wasn’t a total bust.

Because General Welsh taught me three important questions to ask myself anytime I need to land a plane in hazardous conditions:

I went on to fly for the US Air Force and for personal recreation after that lesson.

I got better in the cockpit. I learned new lessons about aviation, navigation, and in-flight emergencies. I saw more amazing views of the world.

But that short flight with the General has always stuck with me.

Not only because the experience was so powerful, but because his three questions have carried me safely through hundreds of flight hours, dozens of intelligence missions, and multiple successful careers.

Coronavirus is a hazard facing all of us right now.

And people are nervous about where their life is going to land.

More than 10 million Americans have been laid off or furloughed since March 2020.

But in the face of these daunting numbers, I hear a General’s questions.

Just like I heard them when I left the US Air Force.

Just like I heard them when I left undercover service with CIA.

Just like I heard them when I left a high-power Fortune 10 corporate salary.

Question #1: Do you need to work right now?

33% of Americans do not need to work right now.

They have 3 months or more of monthly salary saved in an ‘Emergency Fund.’ Jihi and I have been building our own emergency fund since 2010. It started small but now can carry us through more than a year without getting paid.

If you have an emergency fund, this is exactly why you have it.

This is the greatest emergency of our time. And we are seeing just how unprepared CEOs and politicians are for dealing with it.

But you are prepared with an emergency fund. You have already succeeded.

In an aircraft, emergencies are a time to simplify things rather than make them more complicated.

That means if you don’t need to work, then you shouldn’t. Save yourself the health risk, the stress of uncertainty, and the constant noise about the future of the economy.

You are safe in the air.

Question #2: Do you want to work right now?

25% of Americans have money in savings, but not enough to cover 3 months without income.

This is the group with the most flexibility. Unlike their cousins with hefty emergency funds, this group has few (if any) roots they are trying to protect. That means they can turn this global emergency into an unique opportunity!

The massive loss of jobs in March and April is going to turn into a huge swell of new jobs in July and August.

Tourism, leisure, personal service, and gig-economy industries are going to spike when the world cuts loose to take advantage of the final few weeks of summer. And if you ever wanted an excuse to take your bar-tending, cooking, or customer service skills to the beach, now is the time.

For those in IT, program management, and other digital disciplines, you are on the leading edge of the best years of your career!

Because you are proving right now that you can be productive working from home. You are showing your company that you deliver more value than you cost in corporate overhead. And if your company hasn’t been able to get ‘remote work’ to ‘work yet,’ then you already know they are not the right company for you.

Companies hungry to make up lost revenue will love the idea of lower overhead costs from a remote workforce. Businesses will have nearly 3 months of data on the productivity of employees forced to work from home, and poor performers will get left behind.

For those dreaming about being digital nomads, beach-front internet businesses, or professional expats…

Your time is coming.

Question #3: Where is the best place for you to work?

42% of Americans have no money at all in savings.

You have to land somewhere. There is no other option.

The question you have to ask is where to land; in the same job that you used to have? In a different job but the same industry? In the constant cycle of stressing over the next check?

When pilots are forced to land in bad weather or during an in-flight emergency, they accept that there are risks.

There is nothing wrong with risk. It is a part of everyday life. But the trick is knowing how much to risk and when.

The national economy will always outweigh public health, even though nobody wants to admit it.

Rather than fear the risks facing you, minimize them.

If you haven’t built any savings, then the chances are you haven’t been in the right kind of job. Now is the time to fix that.

The next 3 months will be a time when everyone wants to help.

There will always be politics and finger-pointing, but a common humanity and national pride is about to swell. Be ready for it.

Get help from anyone willing to offer it – family, friends, old coworkers, new contacts, total strangers.

You have to land somewhere. You accepted the risks.

Now do what the General did and get the plane down in one piece.

You’ll want to fly again when the weather gets better.