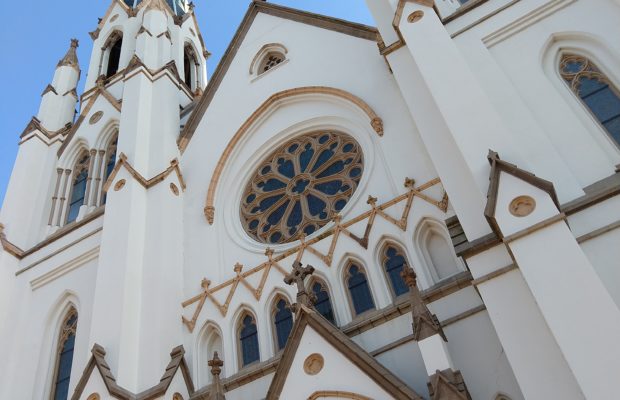 I recently took my daughter with me to the UPS store to send a care package to my mother.

In our family, my mom is called ‘Yaya.’ My oldest nephew started calling her Yaya in 2011 when he was first learning to talk. ‘Yaya’ is Greek for grandma, and even though our family is Latino the term stuck.

Greek or not, my mom is now known by only one name…like Prince, Madonna, and Bologna.

My daughter loves running errands with me, especially when we go to independently owned chain stores.

While my little girl was her typical joyous self, I entered the store with a different mindset.

My time with CIA trained me that human threats are always around us. And just because we trust the brand name on the door, we still have to be aware of our surroundings.

Since the year 2000, 61% of mass shootings have occurred at a place of business.

In comparison, school shootings have decreased by 78% since the early 90’s.

Hard Target: A target with a strong security presence, protective infrastructure, and an emphasis on situational awareness. These are targets with uniformed guards and controlled access (ie: doormen, keyed entry, card scanners, etc.). Shooters know they are unlikely to have success against a hard target. (examples: banks, centers of government, big business headquarters, etc.)

The facts speak to the increased focus on ‘soft’ targets by shooters.

For the would-be attacker, the logic is simple.

A business wants foot traffic and is comfortable with strangers coming and going. They attract large groups of people at predictable times. They are designed to pull people out of open areas and into smaller areas.

All the bad guy has to do is show up and shoot. They let the business bring the crowd.

CIA teaches intelligence officers one important truth about human threats: if you identify them early, you can prevent their attack.

Everyday people are winning against would-be shooters every day because they see the signs.

You can prevent mass shootings, too.

Here are the ‘tells’ operatives look for to prevent a mass shooting:

Human aggression focuses on external people and places. Human threats target locations where they do not feel personal attachment. They may have familiarity or knowledge of the area, as with workplace or school shootings, but they do not personally feel like they belong; they feel like they are an ‘outsider’.

This is the earliest and most important of all tell-tale behavior. Watch carefully for the outsider tell if you want to identify a threat early.

In 2007, 15 year old Chad Escobedo used his stepfather’s rifle to attack Springwater Trail High School in Gresham, Oregon. Escobedo’s attack was well planned and intentional. By the time police had arrived on campus and secured the crime scene, Escobedo was already back home – his gun put away and his clothes changed.

Interviewed after the attack, fellow students and teachers swore that they were shocked by Escobedo’s actions.

They said his attack was totally unpredictable. But Escobedo himself admitted that he had talked to peers, parents and even a professional counselor about his feelings as an outsider, but nobody listened. He decided to make them listen with a gun.

While not every outsider is a threat, there are clear patterns that ‘tell’ when an outsider may be plotting violence. They become self-absorbed and easily offended or threatened. They make negative comments about their planned target – sometimes to the point of verbal or written threats (including violent drawings or artwork). They begin to cut-off relationships that link back to the potential target.

When a human threat plans an attack, they visit (aka ‘case’) the site of their planned attack in advance.

For business owners, schools or places of worship looking to keep their patrons safe, casing activity is crucial to catch early.

Casing is different than general curiosity because it involves interest in both indoor and outdoor spaces. Casing is usually unscheduled because threats want to see the venue/location at different times of day and different days of the week. Depending on the size and complexity of the target, casing could take days, weeks or months.

They do this to collect information that cannot be found on a website. If you are approached by someone showing casing behavior, keep conversation friendly. When they leave, write down their physical description, the date/time, and share it with the venue and your local law enforcement.

Over time, the record of visits will make it clear to police and the venue owner whether they are being cased for a possible attack or dealing with a genuine customer.

In the final moments before an attack, a human threat is unlikely to be playing with their phone, locked in conversation, or paging through a local paper. Instead, their mind is spinning with conflicting thoughts and emotions.

Untrained or self-trained, human threats don’t know how to handle the rush of adrenaline and dopamine that comes at the point of execution.

As they prepare to attack, tunnel vision, a racing heart, and raw aggression combine to create an uncommon and obvious focus.

In April 2002, Luther Casteel walked into JB’s Pub in Elgin, IL with a sawed-off shotgun, a .357 magnum, and a 9mm Pistol. In his own words, “If you can imagine you are about to be attacked or about to attack, your adrenaline is so powerful its got your hands and face shaking.” After killing the bartender and a bar patron, Casteel explains,

“I left there as Satan. If a cop, or Jesus, would have stopped me I’d have killed their ass dead.”

Such is the single-minded focus of an attacker, and their whole body ‘tells’ that intensity. If you see someone in a crowd with a cold-faced determination that makes you uncomfortable, you may be seeing the focus tell.

Watch them closely and be ready to act.

Every human threat demonstrates warning signs; identify the signs early and take action to keep yourself and others safe.

I travel the world sharing the skills I learned as a covert CIA intelligence officer to build safety, control, and influence. Before I host an event, I spend weeks on-site learning the location, the people, and the local area so that I can out-think a human threat and keep my audience safe.

I am not afraid of anything because I am ready for everything.

And every day that I get to give that comfort to someone else, our world gets closer to the kind of world I want to leave my children and yours.